I watch the short videos on my Weather Channel app– I watch them in bed by the glow of my phone at night, barely audible so as to not wake my sleeping partner (Perhaps you too know the ones).

I huddle there, curled up into myself, much as I did on the night of 2016 when I wept at the news of our new president.

And I suppose I know in my skin what this means, the story it tells.

I wish I had something more to say than this, but right now, as always, I am left without words.

When I hold my breath.

And I wonder at what another storm|fire|hurricane|famine means.

And then I re-remember….

Because I know already.

I know what this means. I am afraid of these symbolic manifestations of the earth crying out in its Silent Spring.[1]

And my skin too knows this is true—it whispers a knowing recognition of a planet and of bodies (of all living things) too long pillaged, too long exploited. As if these bodies could be (or are) possible of being sublimated into the way of knowing which ignores that the body, indeed, Keeps Score.[2]

I guess what I’m saying is that I’ve been weeping and grieving and surviving in many ways in both my own life, and as I listen to the cries of the earth and of my fellow humans.

Yesterday I was invited to make a collage in response to Psalm 23.

I made a warrior like Furiosa in Mad Max. 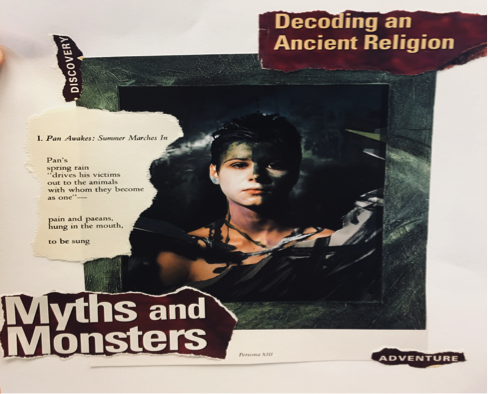 And in her I saw myself | In myself I saw her.

I saw her immediately–my knowing knew and cognized her.

As survivor, yet as one who refuses the world as it is and keeps turning towards the myths and the monsters…

At times to confront and resist.

At times to befriend and release.

At times to grieve and weep.

And at times to co-create other worlds of possibility.

Do you know this story, the story of Furiosa in Mad Max?

In a post-apocalyptic desert of a world undone by climate change, people became things as the earth already had. The resources were controlled and scarce and humans became consigned to roles, life and humanity stolen from them.

Furiosa devises a plan to steal the women who were forced to be breeders of the new humans for this desolate land.

She’s taking them to the land of her mothers.

They write on the wall as the exit: “We are NOT THINGS.”

I wear that saying on around my neck on days when I need to remember:

this earth is not

It is subject, meaning its own entity in the construction of not only sentences but also in respect of this: subjectivity that resists objectification.

So we say: “We are NOT things. We are not objects for using.”

“This earth is not a thing | some object for using.”

And when Furiosa realizes that the land of her mothers is gone, she weeps in a guttural way that is not allowed for a woman on screen.

And after the weeping: they go back to the place they ran from.

They return to overthrow the one who cosines all to be things in a universe of scarcity and objectification.

And when this happens, well… there is water enough for all to drink.

And maybe this is it:

That as I sleep and watch the news of storms while curled up in a fetal position, my body knows something of what it needs—for the womb I fashion as I grieve, it nurtures me. Indeed, the wombs they nurture us as we sleep and move into the darkness.

And then we awake in the morning, and by doing so we bear and birth ourselves into life once more.

And with this new day we then co-create and midwife with one another a world in which water is for us all.

I suppose this doesn’t solve climate change in itself, but it gives me resolve–

And to work for a world where we

listen to our bodies, we

listen to each other, and we

listen to this earth.

So for tonight, I write in the midst storm, and I remember.

We write in the midst of the storms.

The world is crying out its silent spring. May we keep writing and resolving and co-creating anew.